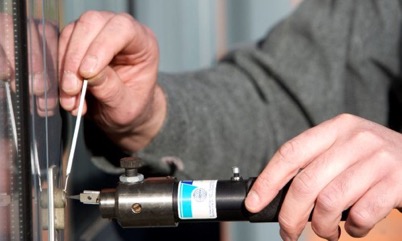 Posted at 08:10h in Sin categoría by admin
0 Likes

Perhaps you have been surprised with the title, because you should know that learning to force a lock could be very useful and above all it could save your life at the time of some urgency, if you have lost your keys or have been left out of the house without power get in. Mainly investigate the most common types of locks that exist, you will see that the cylinder, can be opened with very simple tools, a little patience and common sense on how to do it correctly. However, keep in mind that the best option will always be to go to emergency locksmiths < / strong> to ensure you don’t have worse consequences.

Before you begin, you will have to gather all the necessary tools and oil the lock. Start by unlocking the lock and loosen it carefully by changing the position of the locking gear bolts. Use the raking method if you are looking for a faster technique. When a key is inserted into the rotor slot, the teeth press the bolts that move through a spring mechanism; emergency locksmiths know that the lock bolts have two parts: the upper and lower bolts, allowing the correct operation from the space between lower and upper bolts; It is aligned with the rotary closing system, in what is known as the line cut, which rotates the rotor and thus the lock opens.

You will not be able to see the inside of the lock when you force it, so it is essential to have a mental image of the mechanism, in addition the number of bolts is different from one lock to another. The locks usually have three or four bolts while the door locks usually have between six and eight bolts; Some types of locks, especially those made in Europe, have bolts at the bottom of the cylinder instead of above.

As mentioned it will be very important that you investigate and in the case of not having emergency locksmiths you should know the name and use of each basic tool to disassemble a lock will help you understand the instructions more easily . This step is of great importance since in the popular culture some functions of these tools have been erroneously represented, where the three most important are; The tension wrench is a thin piece of metal with a right angled end. It can also be shaped like a z or a l, with a straight line instead of diagonal, at one end you can introduce the rotor which is the rotating part, in order to apply pressure on the lock.

Finally the pick, known among the emergency locksmiths for being a tool that has a handle that narrows until it ends in a thin, very pointed piece with a slightly curved end.